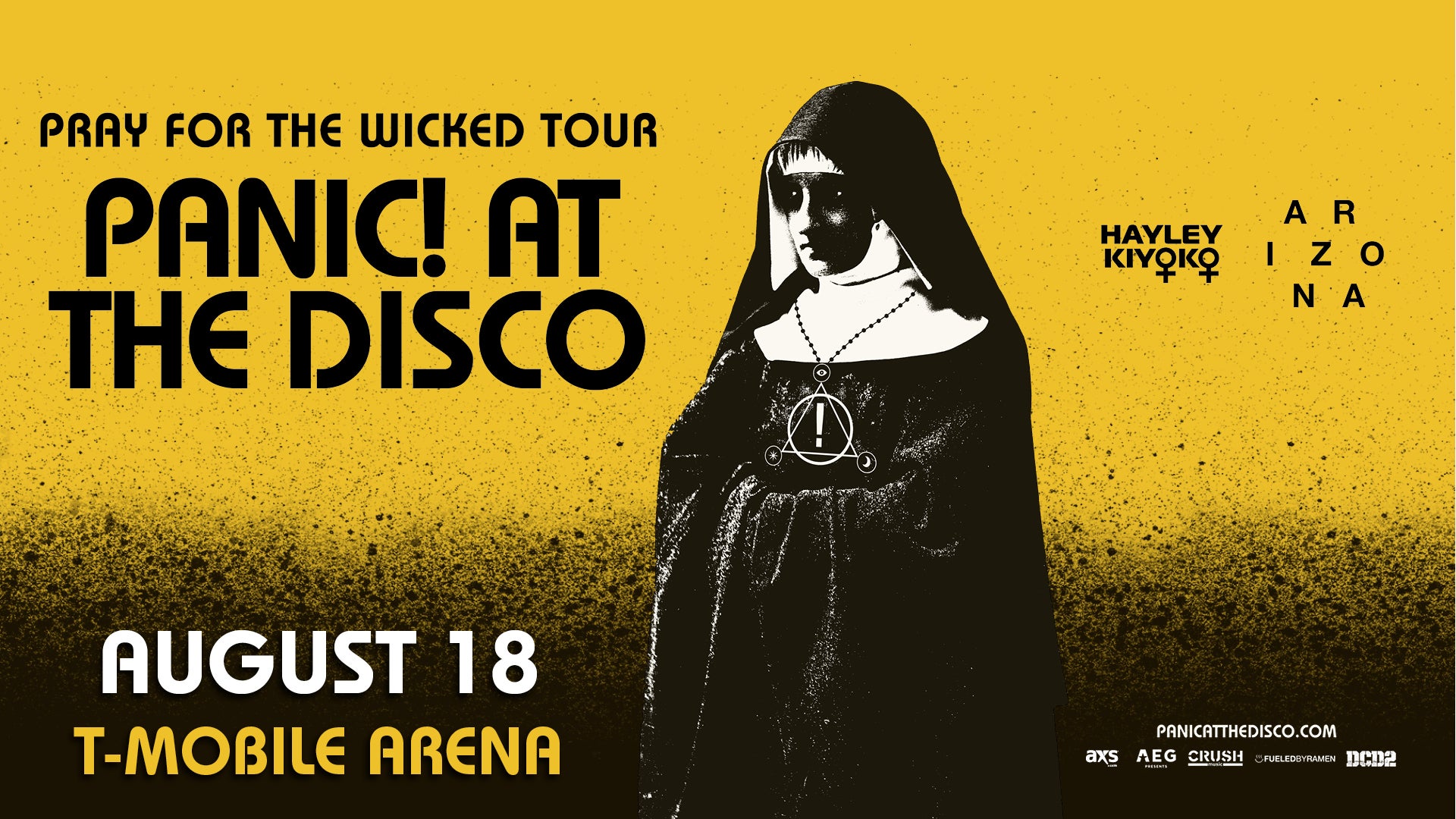 PANIC! AT THE DISCO ANNOUNCE SIXTH STUDIO ALBUM PRAY FOR THE WICKED, OUT JUNE 22

LOS ANGELES, CA - March 21, 2018 - After a week of cryptic clues to their fans that set the internet a buzz, Grammy-nominated Panic! At The Disco today announced that their highly anticipated sixth studio album, Pray For The Wicked, will be released on June 22, 2018 via Fueled By Ramen/DCD2 Records. The album, produced by Jake Sinclair, is available for pre-order now with new single “Say Amen (Saturday Night)” and “(F**k A) Silver Lining.”

“After being away in New York for months doing Kinky Boots, I just wanted to hang out at home when I got back to LA. I was so revved up that I asked some friends to come over to my home studio to help me write about all the incredible things I’ve experienced the last couple of years,” said Brendon Urie, Panic! At The Disco frontman. “Pray For The Wicked is my 'thank you' to our fans and the most fun I’ve ever had making album.”

Panic! At The Disco also unleashed an accompanying music video for “Say Amen (Saturday Night)” directed by longtime collaborator Daniel “Cloud” Campos and Spencer Susser. The video is part of a trilogy that acts as the prequel to “This Is Gospel” and “Emperor’s New Clothes, also directed by Cloud. P!ATD will perform the song on “The Tonight Show Starring Jimmy Fallon” tonight on NBC (check local listings for times). WATCH “SAY AMEN (SATURDAY NIGHT)” NOW HERE: https://youtu.be/jVXauWq9Hwg

The release of the album will be celebrated by a U.S. arena tour, produced by AEG Presents, that will kick off on July 11, 2018 in Minneapolis, MN, and will visit major markets throughout the summer before concluding in the band’s hometown of Las Vegas on August 18th. A R I Z O N A and Hayley Kiyoko are support for the 28 city tour. Fans who pre-order Pray for the Wicked via Panic’s webstore before March 29th at 9pm ET will receive a unique presale code for first access to tickets. Pre-sale tickets will be available beginning March 30th at 9am local time and general tickets will be available to the public beginning March 30th at 12:00 p.m. local time at PanicAtTheDisco.com. The complete list of upcoming dates for the Pray For The Wicked Tour can be found below.

Pray For The Wicked follows Panic! At The Disco’s critically acclaimed fifth album, Death Of A Bachelor, which was released on January 15, 2016 via Fueled By Ramen/DCD2 Records. The album debuted at No. 1 on the Billboard 200 Chart and was nominated for Best Rock Album at the 2017 GRAMMY® Awards. The RIAA platinum selling release was the highest selling rock album and fourth-highest selling album released in 2016, according to Nielsen Soundscan. The album has also spawned RIAA certified gold tracks “Hallelujah," “LA Devotee,” “Don’t Threaten Me With A Good Time” and platinum “Victorious,” "Death Of A Bachelor,” and "Emperor's New Clothes."   Most recently, frontman Brendon Urie starred as Charlie Price in the critically acclaimed Broadway hit Kinky Boots.

PRAY FOR THE WICKED TRACKLISTING

PANIC! AT THE DISCO - PRAY FOR THE WICKED TOUR DATES

About Panic! At The Disco

Award-winning internationally acclaimed rock band Panic! At The Disco released their fifth studio album, Death of a Bachelor, in January 2016. The album debuted at No. 1 on the Billboard 200 chart, with their single "Victorious" debuting at No. 1 on iTunes Top Songs, iTunes Alternative Songs, and Billboard and Twitter's Trending 140 charts just hours after its release. The first song off the album, "Hallelujah," was released to equal enthusiasm and has since accumulated more than 49 million plays on YouTube. The band's Gold-certified fourth studio album, Too Weird To Live, Too Rare to Die!, was released in October 2013, and debuted at No. 2 on the Billboard 200, marking their second album to do so. Panic! At The Disco's previous albums include 2005's double-platinum A Fever You Can't Sweat Out, 2008's Gold-certified Pretty. Odd., which debuted at No. 2 on the Billboard 200, and Vices & Virtues, which debuted at No. 7. Panic! At The Disco have been nominated for multiple awards, including a GRAMMY, Teen Choice Award, Alternative Press Music Award, Kerrang! Award, and MTV Video Music Awards. At the MTV VMAs in 2006, they won the highly coveted Video of the Year trophy for the video for their smash "I Write Sins Not Tragedies." Most recently, frontman Brendon Urie starred as Charlie Price in the critically acclaimed Broadway hit Kinky Boots.