(NEW YORK) May 4, 2017 —- Following the excitement of the BIG3 Draft in Las Vegas last weekend, where all eight teams finalized their five-man rosters, the BIG3 has released the full 2017 season game matchups, and announced that tickets for all 10 games will be on-sale starting Saturday, May 13 at ticketmaster.com.

The league will tip off at Barclays Center in Brooklyn, NY on June 25 with four back-to-back games featuring All-Star basketball icons and celebrated fan favorites.  Week 1 will see Mike Bibby and Ricky Davis’ Ghost Ballers take on the 3 Headed Monsters led by co-captains Rashard Lewis and Jason Williams.  Coaches Julius ‘Dr J.’ Erving’ Tri-State and Clyde “The Glide’ Drexler’ Power will square in a Week 1 showdown.  Allen Iverson aka The Answer, and the rest of 3s Company are set to combat Brian Scalabrine and his Ball Hogs squad.  BIG3 first overall draft pick Rashad McCants is ready to prove to his Captains Kenyon Martin and Al Harrington that he was the right choice, when Trilogy challenges Chauncey Billups, Charles Oakley and the rest of the Killer 3s.

Each Sunday this summer, BIG3 will bring competitive 3-on-3 half-court basketball to a different city throughout the country, including basketball hot beds Brooklyn, Charlotte, Tulsa, Philadelphia, Nashville, Dallas, Lexington (Ky.), Los Angeles, Seattle and Las Vegas.  Fans will have the opportunity to experience four high-energy match-ups and witness over 40 of the sport’s most skilled competitors battle for the title of 2017 BIG3 Champions.

The full season schedule is below including team match-ups and rosters: 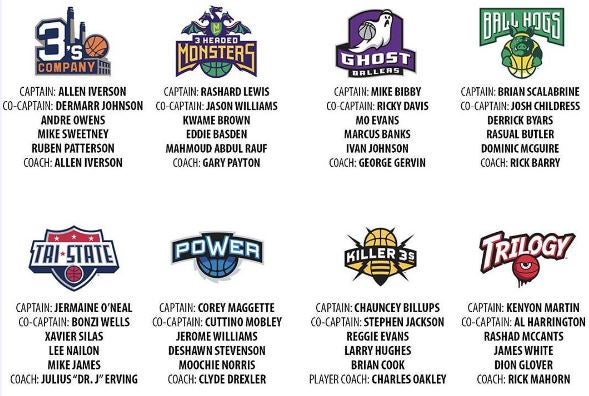 BIG3 games will be played every Sunday in a different city, in a quadruple header at the same venue.  Games will be presented the following night in primetime at 8 p.m. ET on Fox Sports 1 in a thrilling "Monday Night Basketball" experience. The league championship will be played on Saturday, Aug. 26 and broadcast live on the FOX broadcast network at 4:30 p.m. ET.

Featuring professional basketball’s first four-point shot, BIG3 games will be packed with highly skilled, intensely competitive matchups in the world’s most popular form of basketball – 3-on-3.  The winning team will be the first to score 60 points.  BIG3 games highlight the biggest basketball superstars competing at the highest competitive level.  The league structure encourages this incredibly, competitive group of players to vie for a revenue share based on final league standings.

For more information and to sign up for news updates, visit www.BIG3.com.

BIG3 (www.BIG3.com) is where basketball superstars play. The premier half-court, 3-on-3 basketball league, BIG3 features many of the greatest, most popular and skilled NBA players of all time, including Allen Iverson, Chauncey Billups, Gary Payton, Kenyon Martin, Charles Oakley and more. Founded by producer, actor and music legend Ice Cube and entertainment executive Jeff Kwatinetz, the BIG3 will combine highly competitive, physical, fast basketball and incredible fan experiences. Comprising of eight teams of five, the league will tip off its 10-week season at Barclays Center on June 25 with games airing on Fox Sports in primetime on Monday nights. Tickets are on sale at TicketMaster.com and BarclaysCenter.com.