Santa Monica, CA (April 8, 2016) – dick clark productions and ABC announced today that the “2016 Billboard Music Awards” will be hosted for the third year in a row by Grammy award winning recording artist Ludacris. He will be joined by first-time host and international recording artist, Ciara. It was also announced that this year’s award show will move to the brand new T-Mobile Arena in Las Vegas. The “2016 Billboard Music Awards” will be the first non-Pay-Per-View live broadcast event from the new venue, which officially opened on Wednesday, April 6, 2016. The “2016 Billboard Music Awards” is set to return to ABC and will broadcast live on SUNDAY, MAY 22 at 8pm ET.  This year’s show will showcase big performances, unexpected collaborations and pop culture moments that will have everyone talking.

“The Billboard Music Awards is one of best award shows to honor chart success. My great friend Ludacris and I have also shared songs together on the Billboard chart,” said Ciara. “I look forward to sharing the stage with him on this special night. It will definitely be a night to remember!”

Ciara,” said Ludacris. “I’m looking forward to another great show in a new and exciting venue."

The “2016 Billboard Music Awards” finalists will be announced on Monday, April 11 live on ABC’s “Good Morning America.” Tune-in to “Good Morning America” in the 8am ET hour when Ludacris and Ciara reveal finalists in six categories.  Immediately following the broadcast, five additional categories will be exclusively announced live via Billboard Music Award’s Facebook and Periscope, followed by a live stream on ABC News of the remaining categories.

Billboard Music Awards finalists are based on key fan interactions with music, including album and digital songs sales, radio airplay, streaming, touring and social engagement. These measurements are tracked year-round by Billboard and its data partners, including Nielsen Music and Next Big Sound. The awards are based on the reporting period of March 23, 2015 through March 17, 2016.  Since 1940, the Billboard charts have been the go-to guide for ranking the popularity of songs and albums, and are the ultimate measure of a musician’s success.

For the latest Billboard Music Awards (BBMAs) news, exclusive content and more, be sure to follow the

BBMAs on social and join the conversation by using the official hashtag for the show, #BBMAs.

As a recording artist, Chris “Ludacris” Bridges has sold more than 15 million albums domestically, thanks to the blockbuster success of such singles as “Stand Up,” “Get Back,” “Southern Hospitality,” “Number One Spot,” “Money Maker”  and “My Chick Bad.” All of these records were accompanied by ingenious videos that demonstrated Bridges’ far-reaching imagination, and his willingness to stretch the boundaries of what rap videos should look and feel like. Most recently, he starred in Furious 7, the seventh installment in the global box-office hit franchise. His other feature film credits include Universal Pictures’ Fast & Furious 6; Fast Five; 2

Fast 2 Furious; Garry Marshall’s ensemble comedy New Year’s Eve; and Ivan Reitman’s romantic comedy, No Strings  Attached,  opposite  Ashton  Kutcher  and  Natalie  Portman.  His  acclaimed  performances  in  film, (Crash, Hustle & Flow), and television, (Law & Order: Special Victims Unit), have Hollywood and critics alike buzzing about his increasingly impressive screen resume. Stepping back into the studio, he is also now wowing fans with his 8th studio album, Ludaversal. A consummate businessman, Ludacris is enjoying success outside of entertainment. His latest venture includes a highly anticipated new restaurant coming soon to the Hartsfield- Jackson Atlanta Airport. His philanthropic efforts rival his entertainment accomplishments. He also partnered with Crash writer/director Paul Haggis and Artists for Peace and Justice to help raise more than $4 million for Haitian relief efforts. In addition to that, he has raised more than $100,000 for disaster victims through The Ludacris Foundation. Having partnered with Jane Fonda, Bill Gates, Richard Branson, and Nelson Mandela, to name a few, The Ludacris Foundation continues to inspire youth through education.

Ciara is a Grammy Award winning singer, songwriter, producer, actress and entertainer. She released her 6th

studio album, Jackie (Epic Records / Sony Music Entertainment) in May 2015, named fittingly after her own mother. The first leg of the Jackie Tour this year in the U.S. was sold-out and received rave reviews. The Second leg of the Jackie Tour will include shows outside the U.S. in North America beginning on March 20 and continuing through April 24. Known for her dance abilities and choreography throughout her career, Ciara has been dubbed the “Queen of Dance.” From the seductive sway of the new single “Dance Like We’re Making Love”, to the global thump of “Stuck on You”, it’s clear she’s still the Queen of the dance floor. Ciara has appeared on both television and in films. Her credits include: “The Game” on BET (2013), the films “That’s My Boy” and “Mamma I Want To Sing” (2012) and “All You’ve Got” (2006).  This year, Ciara appeared on the NBC series, “I Can Do That” (2015). With a career spanning over a decade, Ciara has sold over seven million albums and 16 million singles worldwide, including chart-topping hits “Goodies,” “Ride,” “Oh,” “1 2 Step,” and “Body Party.” “I Bet” adds to Ciara’s list of 27-charted hits, impacting urban and rhythm radio formats as well as Top

40 Mainstream radio, and has over 25 million views on VEVO since its March 9, 2015 premiere. For Jackie, the superstar hopes of “tons of success” but more than anything, she wants fans to know her– the real her.

Billboard is the world’s most influential music brand, built on the most complete and well- respected database of    charts    across    all    music    genres.    The Billboard charts    define    success    in    music.    From    the iconic Billboard magazine to Billboard.com, the ultimate consumer-facing destination for millions of passionate music fans, to the industry’s most elite conference series and influencer events including the Power 100 and Women  in  Music  –  the Billboard brand  has  unmatched  authority  among  fans,  artists  and  the  industry alike. Billboard was named the leading U.S. brand on Twitter, surpassing the NFL, ESPN, BuzzFeed and MTV, with 7.5 million engaged actions in Q4 2015, and named an overall Top 10 U.S. Media Publisher in December

Las Vegas on Sunday, May 22 at 8:00pm ET/PT. The show will showcase this year’s hottest and biggest music stars. Billboard Music Awards finalists are based on key fan interactions with music, including album and digital songs sales, radio airplay, streaming, touring and social engagement. These measurements are tracked year- round by Billboard and its data partners, including Nielsen Music and Next Big Sound. The awards are based on the reporting period of March 23, 2015 through March 17, 2016. The “2016 Billboard Music Awards” is produced by dick clark productions. Allen Shapiro, Mike Mahan, Mark Bracco, Barry Adelman and Robert Deaton are Executive Producers. 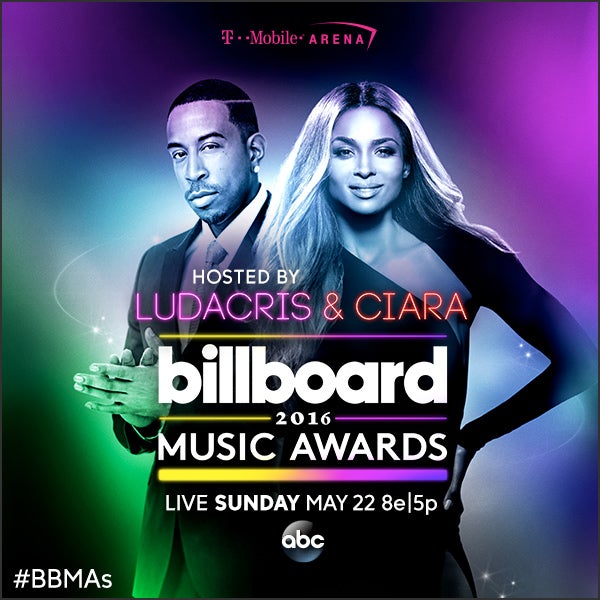